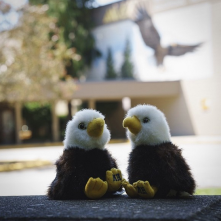 MEI Class of 1948 alumna Etta Hellyer, age 90 and Henry Martens, age 95, plummetted thousands of feet from the sky on June 8, 2019 in support of the Tabor Village senior’s home capital campaign. Martens’ late wife lived at the Abbotsford facility for two years and his mother was a resident years before that.

“I’m thrilled to skydive. I’m doing it because of Tabor Home,” said Martens.

It’s not the first time he’s taken this leap of faith. He pulled a similar stunt for his 90th birthday for a different charity.

“I am more than a daredevil — I shouldn’t be here. There’ve six times where I could have been dead.”

He said he had no hesitations about doing it again.

It was a first for his counterpart Etta though, who appeared unshaken by the task ahead. “I’m not at all nervous about it, but the media attention is more nerve-racking,” said Hellyer.

She even attempted a more advanced manoeuvre.

“I got the somersault, that’s the only time I didn’t think we were going to make it.”

More than 100 people filled the grass fields of Skydive Vancouver to cheer them on.

All proceeds from the event will go toward replacing the 60-year-old care home. Suited up and ready to go. 95-year-old Henry Martens and 90-year-old Etta Hellyer are skydiving to fundraise for a new Senior’s Care Home in Abbotsford. @CTVVancouver #abbotsford pic.twitter.com/HTuCFex3Ax

Letter to the Editor: Etta’s response to Fall 2019 issue of Connections

75 years! It seems like yesterday that my best friend Betty and I were so excited to be starting our high school in the new (old) school, along with many of our church friends. There were not many students in our school that first day in 1944. Our teacher, Mr. F. C. Thiessen, Mr. I.J. Dyck, and Mr. Neufeld demanded perfection in German, Religion, and our regular curriculum.

Many years and experiences have passed. Nurse, teacher, realtor, artist, mother to great grandmother. Losing so many family and friends through the years has left me with memories to reflect on. This past year was memorable. Celebrating my ninetieth year by skydiving as a fundraiser for Tabor Village. It was great to have 4 generations and 9 family that joined me in that jump. Henry Martens (age 95, of Tabor Court) also jumped with 4 of his family. I am looking forward to doing this again in 5 years.

This is how one of your very first 1944 students spends retirement.

From Fall 2014 Issue of Connections Newsletter

Fall 1944 – what excitement! A new (old) school; my Sunday school friends and I would have uniforms, German, Religion, as well as all the required government subjects.

The buildings has unfinished, weathered board on the outside. These buildings had been moved from the properties that the Federal government was developing for the new Abbotsford airport.

These buildings were moved to the grounds of the first South Abbotsford Mennonite Church, at the corner of Huntingdon and Gladwin Road. Our playground was the newly opened church cemetery, next to the church. Classes were 9-4.

My years at MEI were 1944-1947. In my final year we transferred to the big new school located at the present Evergreen Village. This was a huge step – a school that was one of the biggest in the valley. Everything was so shiny and bright compared to the dingy rooms we were used to. In the fall of 1947 after Grade 11, I was accepted into the Psychiatric nurses training programme in Essendale Hospital. After completing my P.N., I married and raised my family of six children.

In 1969, I went back to school and completed my Early Childhood Education degree, opening a private, government licensed day care and nursery school. I accepted special needs children and worked with F.V.C. (now University of the Fraser Valley) as a practicum training centre for students in the E.C.E. program.

This period in my life was the most fulfilling time, to see the small developmental steps of a child.

The arts have always been a big part in my life. For the last 17 years I have had the pleasure of serving on the board of the Abbotsford Arts Council, and doing volunteer work.

Now in my 86th year, my greatest joy still is, when I can paint with my grand and great grandchildren and show them the magic of watercolours and the joy of colour in this beautiful world that the Creator has given us.